Whale watching in Knysna and surrounds 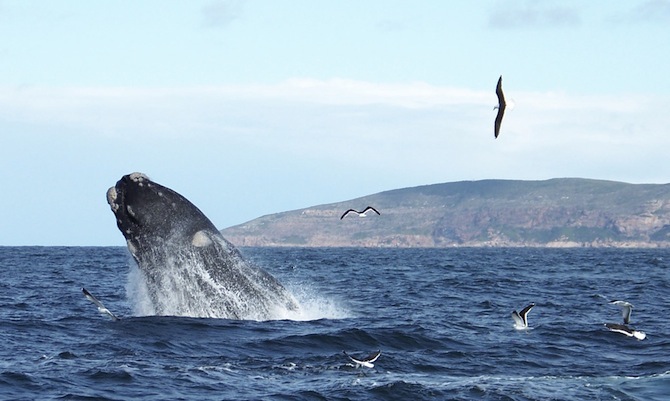 The Southern right whale bids farewell to its icy feeding grounds off Antarctica, and heads to a more temperate environment in which to mate and calve. When they arrive in winter and early spring, the southern Cape coast literally transforms into a sea of whales. Spectators come from near and far to witness the fantastical mix of raw power and nimble water acrobatics displayed by these surprisingly elegant mammals.

So named because they were once deemed the ‘right’ whale to hunt, fortunately these behemoths have been protected by law since 1935. These days the only attention they garner is harmless, with excited crowds merely marveling at a distance.

Although the Southern right whale is the region’s main draw card, humpbacks, Bryde’s whales and orcas are also know to frequent the area. Weighing in at a full 20 tons lighter than their Southern right cousins, humpbacks migrate north between May and December to breed off the coasts of Mozambique and Angola. Whereas Bryde’s whales are present all year round, although they are usually seen a little further out to sea. Killer whales and orcas are also year round visitors.

Southern right whales are resident along the Cape south coast from June to November. Peak calving season occurs in July and August, although you’re sure to see lots of these massive mammals in September and October as well. Weather permitting, daily sightings are almost guaranteed. Some lucky folk have even been known to spot as many as 20 whales gamboling together.

Seeing Southern rights breaching and blowing all over the bay is an almost overwhelming experience, especially as these 60 ton beasts often venture quite close to shore in order to show off their moves. And just in case you’re wondering, if you see a huge black tail fin sticking out the water, then you have definitely spotted a Southern right whale.

The Garden Route from Stilbaai to Mossel Bay, and further along to George, Wilderness, Knysna and Tsitsikamma is a magnificent stretch of coastline, and one that is well-known for hosting Southern rights and other whales during their different seasons.

Whale-watching is a magical experience, and something everyone should do it at least once. Click here to see more pics.