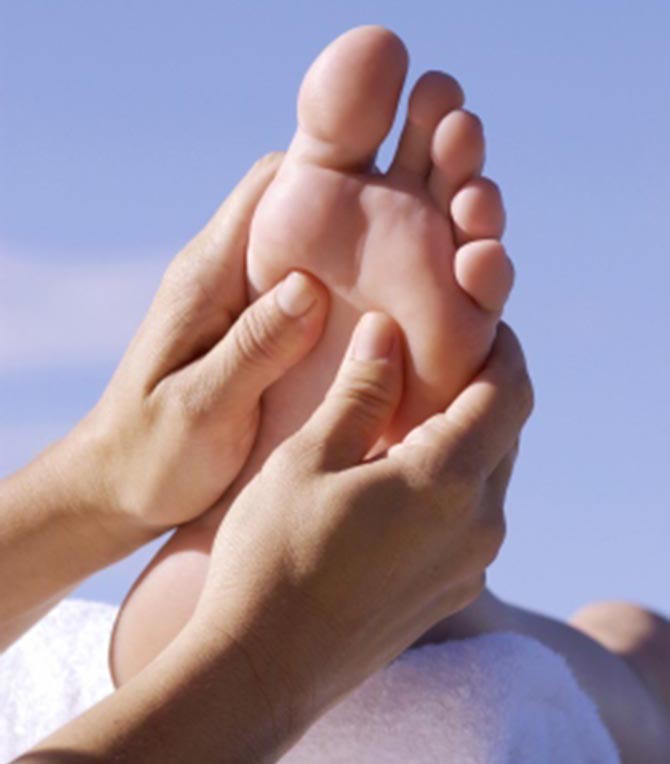 Reflexology or Reflex Zone Therapy uses specific points on the soles of the feet or palms of the hands to influence certain organs and to treat disorders.

Although most people think reflexology originated in the East as an ancient healing art, its roots are far more recent and scientific.Â Russian physicians of the early 1900’s followed the reflex research of Nobel Prize winner Ivan Pavlov to create reflex therapy. The basic concept stems from the study of brain-organ dynamics. Put simply, an organ experiences illness if it receives the wrong operating instructions from the brain. When pressure is applied to the zone-point relating to that organ, the body’s ‘misguided’ instructions are interrupted. It is believed that through a series of continuous interruptions this negative cycle can be broken, prompting the body toÂ normalise and revert to a more improved manner. The term reflexology was coined in 1917 by physician-researcher Vladimir Bekterev.

Meanwhile, research was also being conducted in America by Ear, Nose and Throat specialist Dr. William Fitzgerald. In 1913 he published a paper outlining 10 vertical zones running through the body. He associated these zones with the energy flow through organs, these zones terminated in the hands and feet. His studies were refined in the 1940’s by physiotherapist Eunice Ingham who developed the now widely accepted pressure-point charts for the hands and feet.

The aim of reflexology is to restore homeostasis – internal equilibrium – where organs and glands work optimally and in harmony to help promote health, and in so doing help prevent illness and disease. Reflexology is also used with great success to relieve stress and to stimulate the immune system.

Your Reflexology treatment starts with a gentle foot scrub. Lotion, cream or oil with added essential oil may then be used to create a more effective therapy. Recent research has shown that only relatively light touch is necessary. The deep, painful pressure that was once the hallmark of reflexology treatment is a thing of the past. This is good news for you, as you effortlessly drift away to the firm but soothing strokes. Dependent on the therapist’s findings, some body massage may also be included in your treatment.

Leave the Body Boma treading more lightly in the Forest!