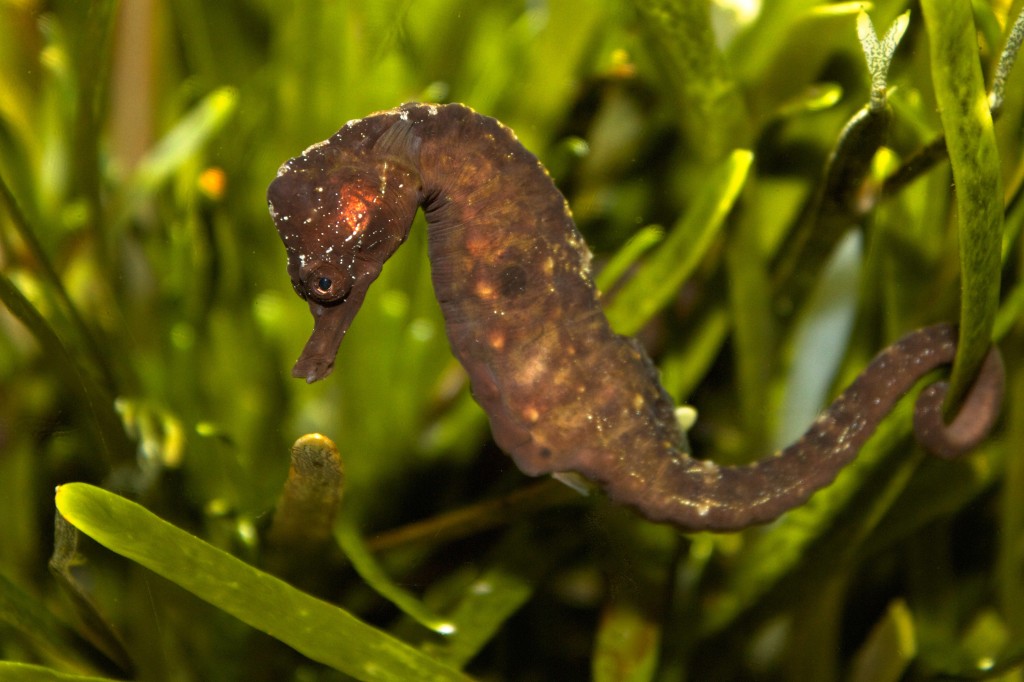 The Knysna seahorse is the most endangered seahorse in the world. It possesses the characteristic seahorse shape and the body is encased in a series of bony rings. This small, delicate creature is a mottled greenish brown colour, sometimes with scattered dark spots. The snout is relatively short and the neck arches in a smooth curve without a crown. The tail is muscular and is used to grasp a mate during courtship, or as an anchor to the substrate.

Seahorses have a remarkable method of reproduction; the female transfers her eggs into the male’s pouch during mating. The eggs are fertilised within the pouch and embryos develop, embedded in the tissue lining the pouch wall of the ‘pregnant’ male. For the Knysna seahorse, the gestation period is around 2 – 3 weeks after which time the male ejects his offspring who are then extremely vulnerable, receiving no further parental care.

Seahorses have no teeth and no stomach, using camouflage to ambush prey, they then swallow items whole. They are not particularly mobile creatures, being propelled forward only with the dorsal fin.

Endemic to South Africa, this species has the smallest-known geographic range of any seahorse. The best-known population is found in the estuary from which this species gets its name, the Knysna Estuary, but it additionally occurs in 3 other estuaries that are also situated along the south coast of South Africa.

This bottom-dwelling creature is found in bays and estuaries, at depths of between 50 cm and 20 metres; associated with submerged vegetation.

The highly restricted range and fragmented population of this species make the Knysna seahorse particularly vulnerable to exploitation and habitat damage. The ‘garden route’ area of South Africa is becoming increasingly developed and this is having a detrimental effect on the population. This species is the only seahorse that has so far been identified to be primarily at risk from habitat damage.

The Knysna seahorse is protected in South Africa and may only be collected with a permit. Further research into population distribution and the behaviour of the species is urgently needed before an effective conservation action plan can be implemented.

This entry was posted in Eco awareness, Uncategorized and tagged Knysna seahorse. Bookmark the permalink.