Posted on November 1, 2014 by Phantom_Forest 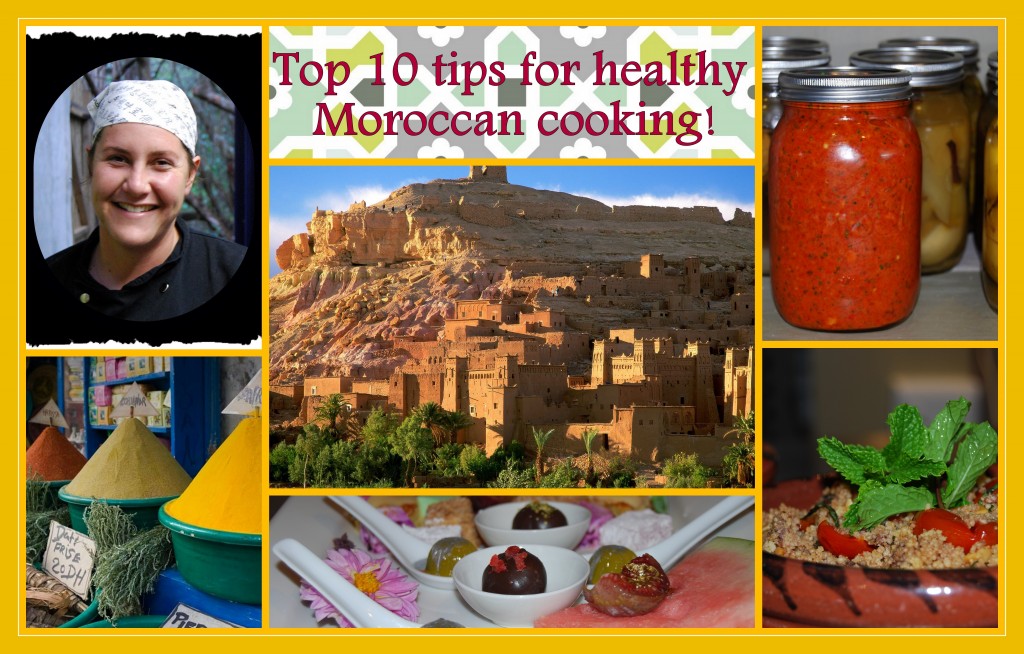 Moroccan cuisine is influenced by Morocco’s interactions and exchanges with other cultures and nations over the centuries. Moroccan cuisine has been subject to Berber and Mediterranean influences. The cooks in the royal kitchens of Fes, Meknes, Marrakech, Rabat and Tetouan created the basis for what is known as Moroccan cuisine today.

Chickpeas are not only a traditional Moroccan ingredient used in multiple dishes but they’re also a great source of protein. In my experience the best method to cook them is to pre-soak and when they are swollen and hydrated, gently boil them. Divide the chickpeas into portions and freeze (for future use) before adding to meals.

Introduce cumin into your diet. Its benefits are numerous and varied. Not only does it add amazing flavour but when I travelled around Morocco many of the locals told me about its many health benefits. It is excellent for digestion, acts like an antiseptic and is said to be rich in iron and a great detoxifier. On a Moroccan table you will be able to find a variety of spices to season your food such as salt and pepper both of which are high in antioxidants but ground cumin is my secret ingredient.

Dried fruits are a great way of getting important vitamins into your diet and are a common feature in Moroccan cooking. When you’re making traditional tagines ingredients like raisins which contain iron, potassium and calcium, or dried apricots which contain significant amounts of vitamin A and magnesium are the perfect mix. Dates and prunes are also great additions to any Moroccan tagine and will top up your vitamin A, potassium and copper levels.

Moroccans are a healthy bunch and it’s no coincidence that they regularly serve couscous with seven vegetables. In one meal you’ll get more than the recommended five-a-day intake and veggies are low in fat, which will help keep you slim and give you a boost of much needed vitamins and minerals to keep you healthy.

Fava beans are used in many traditional Moroccan dishes including dips and soups and are great additions to any stew or casserole. These magic beans, are also a great source of protein thus the locals tend to only flavour the dish with a small amount of meat and top up their protein needs by eating pulses.

Mixed salads are quick to prepare, easy to source and extremely healthy. Moroccans will regularly prepare the below and it is the perfect accompaniment to a hearty main. Simply cut-up a carrot, a stick of celery, three large lettuce leaves, ¼ red onion sliced and a ¼ red pepper thinly sliced. Also include one tomato cubed, one tablespoon each of freshly chopped parsley

and coriander, one small raw beetroot grated, then mix together in a bowl with a clove of crushed garlic, a shake of cumin and a good splash of olive oil. This salad is healthy and low in fat and will keep you feeling full – long after you’ve devoured it! This particular salad is also great for serial snackers!

Cinnamon is an antioxidant powerhouse and has one of the highest antioxidant levels of any spice. It aids digestion and is easily added to a breakfast shake, a fiery curry or zesty Bolognese sauce. It’s such a versatile spice, simply shake it onto sliced oranges, over your breakfast muesli or stir it into natural yoghurt with a swirl of honey – adding some chopped toasted nuts for extra crunch!

Get creative in the kitchen and concoct a traditional tagine or stew with a delicious blend of spices and some economical cuts of meat that will have wonderful flavours. Let the meat cook nice and slow, don’t be afraid – nothing is lost when you do a one-pot cook, just steam your couscous on top and it will gently infuse it with the rich flavours of your North African stew.

Ginger is another of the key spices used in Moroccan cuisine and besides being a delicious warming spice, tradition suggests that it is helpful in aiding digestion. More recently modern medicine has been attempting to validate the use of ginger to ease indigestion and reduce pain. One of the active ingredients in ginger is gingerol which has anti-inflammatory properties and may be responsible for the benefits that ginger seems to have when consumed regularly. Fitness fanatics can rejoice after research also suggests that ginger can reduce muscle pain caused by rigorous exercise.

Turmeric is easily recognisable to Westerners as the beautiful, golden-yellow spice seen regularly on travel shows focussing on Middle Eastern or North African countries. It’s a spice frequently used in Moroccan cooking and is known as a super spice because of its magic-like properties. When used on cuts and scrapes it can stop bleeding and it’s also high in vital antioxidants. Curcumin, which is the bright yellow compound found in turmeric, has been the focus of many studies. Emerging evidence suggests curcumin may have health benefits due to its anti-inflammatory properties. Not only does it taste great and look great, it can also make you healthier!

This entry was posted in Phantom Feasts and tagged moroccan. Bookmark the permalink.