The magnificent guardians of our river. The African Fish eagle! 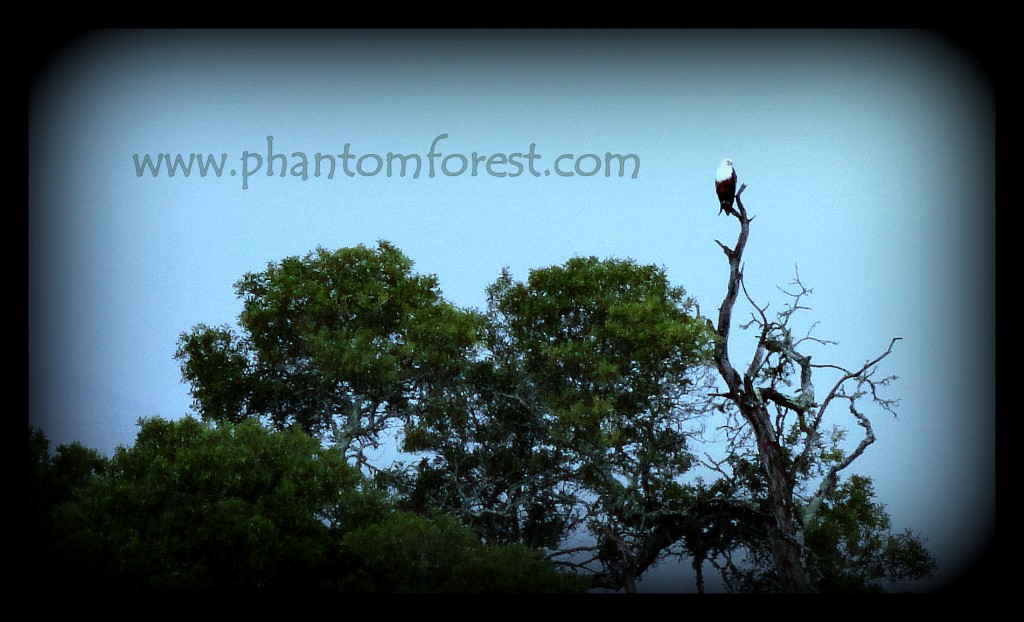 With its distinctive plumage and evocative cry, the African fish-eagle (Haliaeetus vocifer) is probably the most familiar bird of prey in Africa (2) (4). Perched majestically on a high branch, the contrast between the white upper-body and tail, the chestnut belly and the black wings is unmistakeable (2) (5) (6). Much less striking is the almost scruffy appearance of the immature African fish-eagle, with its generally dark-brown plumage and white mottling (2) (6). Although after the first year the plumage begins to resemble that of the adult, it will take at least four to five years and numerous moults to reach full maturity (2) (7). The clear, ringing call of the African fish-eagle, weee-ah hyo-hyo-hyo, made with the head thrown back, has to be the most characteristic and evocative sound of African watersides (2).

The African fish-eagle is a proficient hunter, with live fish accounting for the bulk of its diet (2). It typically hunts from a high perch on a waterside tree, where it can watch for fish moving close to the water’s surface. Once prey is sighted, the African fish-eagle launches from its perch, swoops low over the water, and at the critical moment throws both feet forward to seize hold of its target with powerful talons. Small fish are carried through the air into a tree, but larger catches are dragged through the water to the shoreline. Despite only one in every seven or eight fishing attempts being successful, the African fish-eagle rarely spends more than ten minutes per day actively hunting (2). Aside from fish, this efficient raptor will also take the young of water birds such as the lesser flamingo, and very occasionally will go for monkeys, crocodile hatchlings, frogs and insects. Except for the odd dead fish, fully mature African fish-eagles rarely feed on carrion unless food is particularly scarce (2).

Adult African fish-eagles are normally seen in pairs, but on large, productive lakes, nests and roosts may be only a few hundred meters apart, and many birds can be found together in one area (2). The stick nests are usually built in a tree close to water and are used year after year, growing in size over time with the addition of reeds, papyrus heads, bulrushes and sometimes weaver nests (2) (4). Calling and “dueting”, whilst perched or soaring, is an integral part of the breeding display, and is combined with dramatic aerial dives and falls, with pairs interlocking talons in mid air. The female normally lays one to three eggs in the nest, which are incubated for around 44 days before hatching. Until the chicks fledge after around 65 to 75 days, it is necessary for the adults to spend considerably more time hunting for food, compared with other times of the year. In the wild, African fish-eagles that are fortunate to survive the first year have an estimated life expectancy of 12 to 24 years (2).

The African fish-eagle is associated with a diverse range of aquatic habitats from rivers, lakes and dams to swamps and mangrove lagoons

(2) (4) (6). While wetland degradation and water pollution has affected the African fish-eagle in some areas, this species has benefited considerably from the construction of large dams, particularly in Southern Africa (2) (4). Given that its population appears to be stable and widely distributed, the African fish-eagle is not considered to be under any significant threat (8).

There are no known conservation measures in place for the African fish-eagle.

The African fish-eagle is classified as Least Concern (LC) on the IUCN Red List (1) and listed on Appendix II of CITES (3).

This information was sourced from http://www.arkive.org

Freely accessible to everyone and preserved for the benefit of future generations, ARKive is a truly invaluable resource for conservation, education and public awareness. With the help of the world’s best wildlife filmmakers and photographers, conservationists and scientists, they create an awe-inspiring record of life on Earth.

“As a charitable organization, we rely on the support of others to help us inspire people to discover, value and protect our natural world. ARKive is used by schools, local communities and conservation organisations around the world, and our work is only possible with your help and support. Please help us keep ARKive growing and free to everyone”

We are hugely grateful for any support – together we can do amazing things!

To find out more about the African fish-eagle, see:

To find out more about the conservation of eagles, see:

For more information on this and other bird species, see:

This entry was posted in Eco awareness, Forest mammals, From the Garden Route, From the Phantom Forest, Uncategorized and tagged Birdlife, Fish Eagle. Bookmark the permalink.