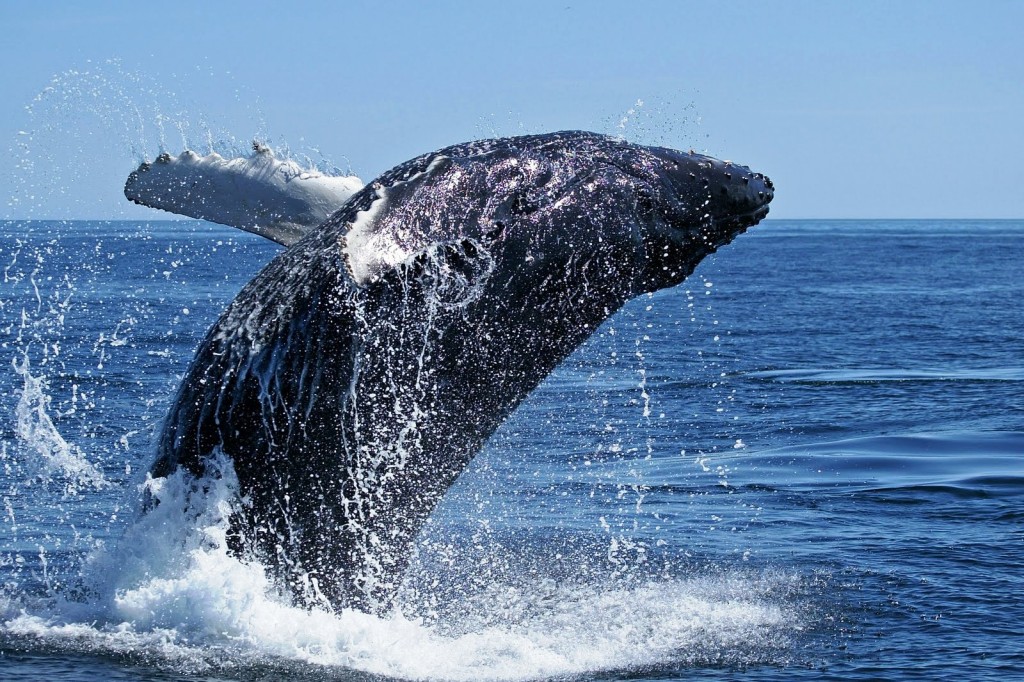 Every year southern right whales migrate from their icy feeding grounds off Antarctica to warmer climates, reaching South Africa in June. The coastal waters teem with the giant animals, mating, calving and rearing their young – and giving whale-watchers spectacular displays of raw power and elegant water acrobatics. The southern right gets its name from the simple fact it was once regarded it as the “right” whale to hunt – the animals are slow-moving, rich in oil and baleen, float when killed and provide an enormous yield. This “rightness” brought the animals to the brink of extinction in the early 20th century, as whalers killed an estimated 20 000 of the animals. Protected in South African waters since 1935, their numbers have slowly crept back to a world population of some 4 000, most of which visit the country’s coastline every year. Playing, courting and nursing Weighing in at about 60 tons and estimated to live as long as 100 years, the southern right whale (Eubalaena australis) has became a major tourist attraction up and down the South African coast. Their breeding ground is the sheltered bays of the Cape coast, with the majestic animals spending up to five months a year here. They pass their time playing, courting, and nursing their newborn calves, often just metres from the shore, providing spectacular land-based viewing. 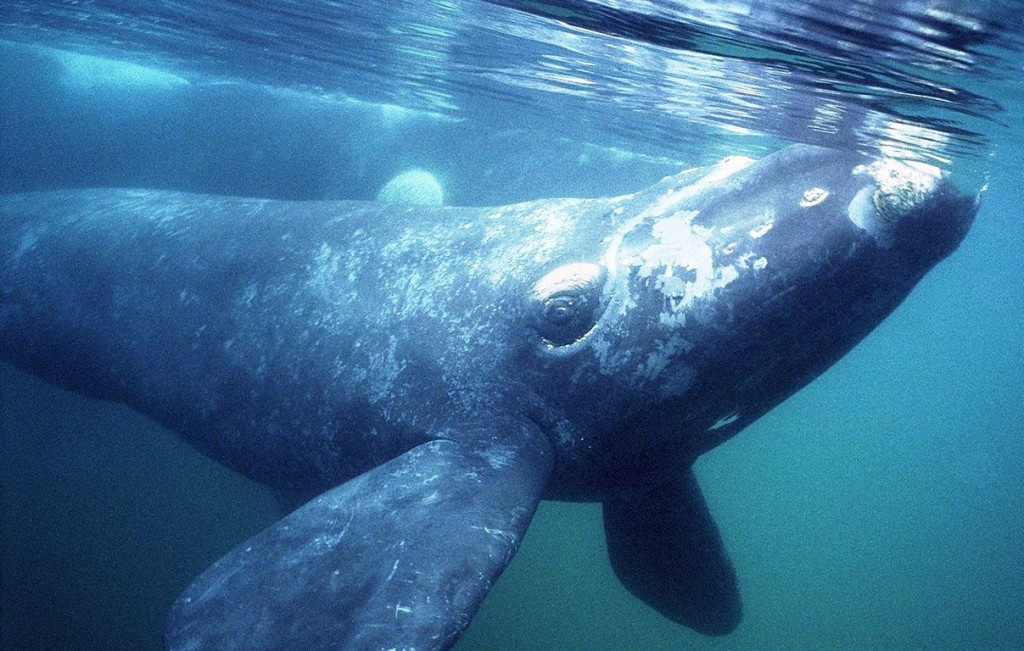 Southern rights are massive and rotund animals, rounder and heavier than the humpback or Bryde’s whale and smaller only than the blue whale. They can be identified by their total lack of a dorsal fin, stubby square-ended flippers, and by callosities, unusual wart-like growths, on the head. Mostly a dark bluish-black colour, about 4% of calves are born entirely white. This is a sex-linked genetic trait – all white calves are male – and the colour darkens to the usual black as the animal matures. The breeding season is during spring, from July to October. Females calve every three years, with a year of gestation, a year raising the calf and a year of rest. The cow needs the rest year to recover from the tremendous physical strain of gestating a four-ton calf in just 12 months, and suckling it for another six months. A calf can drink up to 200 litres of milk and grow by as much as three centimetres every day. Willing performers Intelligent, inquisitive and sensitive animals, southern rights form small social groups of about six related animals. In the breeding season cow and calf pairs can often been seen cavorting in the water together. The way mother and child breach alternately, one after the other, suggests that this and other behaviour may be taught. Southern rights are willing performers for onlookers, often breaching several times in succession to hit the water again with a cannon-blast sound. Another characteristic behaviour, unique to the right whale, is resting head-down in the water for several minutes with the flukes held aloft, as if hoping to be pushed along by the wind – variously called “sailing” or “head-standing”. Then there’s flipper slapping, lobtailing – slapping the tail on the water – and spyhopping, raising the massive head to see above the surface. Their huge curiosity often prompts them to approach boats to investigate – a trait with tragic consequences in the days of the whalers. 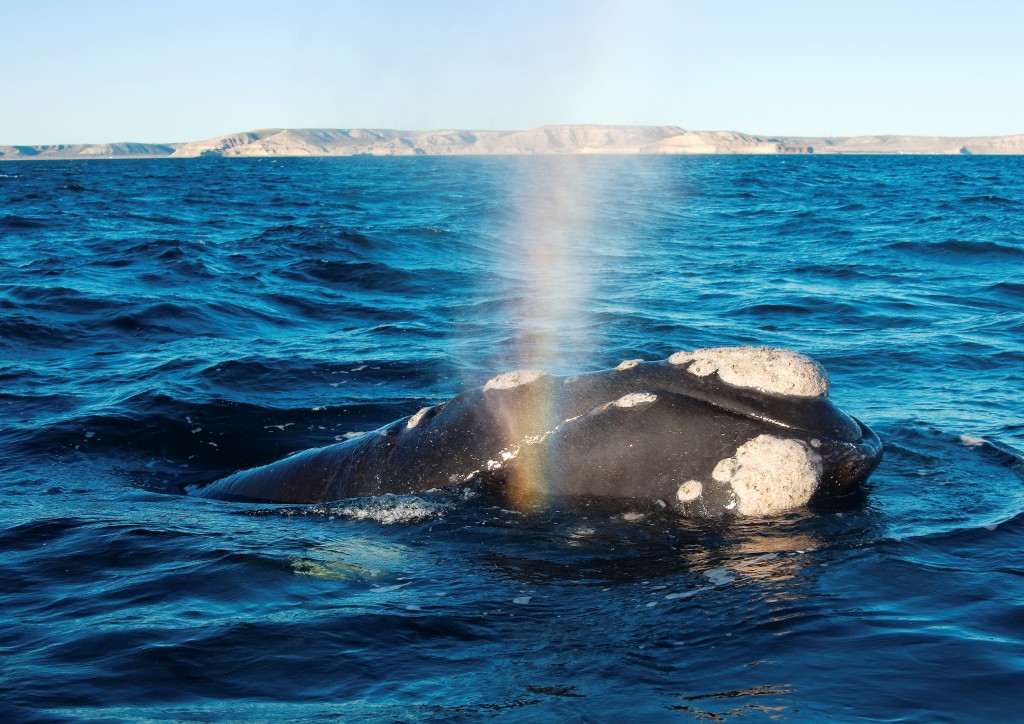 The best time for watching the southern right whale in South African waters is from June to November along the Cape south coast, although some will already be as far north as KwaZulu-Natal. Peak calving season is July and August, but whales can still be seen through September and October. Planning a whale-watching route South African whale-watching territory runs from Doringbaai, south of Cape Town, all the way east along the coast as far as Durban. They can be viewed from cliffs and beaches, with boat operators offering trips out to sea for an even closer encounter. The town of Hermanus in Walker Bay on the Cape south coast offers possibly the best land-based whale watching in the world. The animals can be clearly seen from a scenic cliff-top walk, and the town holds an whale-watching festival every September. Hermanus claims to be the whale capital of the world, but so does Plettenberg Bay, further east along the coast. Southern rights visit the bay from about June to November, and migratory humpback whales can also be briefly seen from May and June and then, on their return trip, from about November to January. The Garden Route from Stilbaai through Mossel Bay and on to George, Wilderness, Knysna and Tsitsikamma is a magnificent stretch of coastline hosting southern rights in their season, humpbacks between May and December, Bryde’s whales all year round – and, occasionally, killer whales. From Cape St Francis to the rugged Wild Coast are numerous vantage points to see humpbacks, Bryde’s, minke and killer whales and quite often southern rights, especially in Algoa Bay, while sperm and beaked whales approach close to shore off Port St Johns. Humpback whales are spotted almost daily during their northward migration from May to July and again on their return journey from November to January, occasionally being spotted as far north as Cape Vidal. On the Cape west coast, excellent sightings of southern rights can be enjoyed all the way from Strandfontein, to Lambert’s Bay, Elands Bay, St Helena, Saldanha and Ysterfontein, just north of Cape Town. Whales can also be seen all around the Cape Peninsula and along the south coast to Cape Agulhas, the southernmost tip of Africa. Agulhas is particularly rewarding, with great views of southern right cows and calves at play – up to 50 pairs at a time. Whale watching can also be enjoyed from picturesque town of Arniston along the coast to Cape Infanta.

This information was brought to Phantom Forest by ………. SouthAfrica.info reporter, with material sourced from Centre for Dolphin Studies, South African tourism and Hermanus Tourism.

This entry was posted in Eco awareness, From the Garden Route, The Western Cape, Uncategorized and tagged southern right whale. Bookmark the permalink.